What is a Programming Language and Which Ones Should I Learn?

Have you ever wanted to build something of your own? Or perhaps you’ve seen the inner workings of the internet with lines of code and HTML text and wanted to understand what it all meant. Learning to code can feel like opening the door to a whole new world, and in a way, it is. To get started, let’s become a little more familiar with programming languages.

There are more than 600 possible programming languages that you can learn, so your first look might feel like a dive into the deep end. They don’t all work in the same capacity, and choosing the most appropriate often comes down to what’s trending in the tech industry and what kind of companies you may want to code for later. Thankfully, you don’t have to learn them all to be considered an effective programmer for your chosen specialization. But first, exactly what is a programming language?

What is a Programming Language?

Although it might not seem totally cut and dry, a programming language involves a set of instructions created by a computer programmer. These instructions are meant to create a variety of responses and outputs which the computer can then interpret and carry out.

These programming languages range from relatively simple at a basic programming level, to extremely advanced for highly trained professionals. They can be put to use when developing software, scripts and any other instructions that computers can execute.

What Programming Language Should I Learn?

Because the languages listed above are commonly encountered, they can be great to focus on as you begin to enter the programming world. Depending on what your interests are, such as working with code, HTML or text, and whether you want to work as a front-end or back-end web developer, you might also want to consider exploring Go, R, Arduino, SQL, PHP, Adobe ActionScript and Scheme.

As you can see, different programming languages function better for different scenarios. For example, using MATLAB to design a website isn't going to be as clear cut for many as it would be with JavaScript. The language you choose to use for a particular project might also depend on the preferred language of the business you are working with and the current trends in the tech industry.

How do you prepare yourself for a career as a computer programmer? To start, you should look into degree programs and courses on programming languages. A good program should not only require hands-on practice with the languages themselves, it should also cover topics such as:

At DeVry University, for example, you gain skills in programming languages by pursuing a Bachelor’s Degree in Software Development with a specialization in Software Design and Programming or Web and Mobile Application Development, or an Undergraduate Certificate in Computer Programming Essentials. You can also get a glimpse into programming and learn some basic tech skills with complimentary videos.

Ready to Get Started?

If you enjoy learning how to code your own apps or developing websites from scratch, then programming might be a great path for you. Get in touch today and let’s talk about your next steps toward learning programming languages and pursuing a future in computer programming. 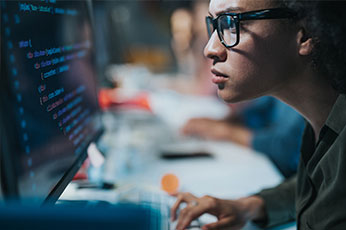 What is Computer Programming and Software Design? 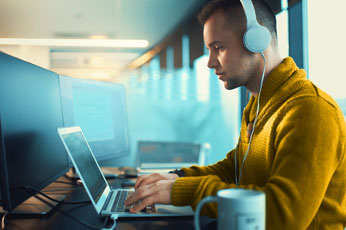