The evening Marco Ruiz and his wife strolled their new neighborhood 20 miles north of Charlotte, North Carolina, they could barely believe their eyes. “We stopped walking and stood in front of our house as our daughters ran ahead and just had to marvel that this is our life,” he said. Later that night, they sat on their backyard patio staring at the stars, overwhelmed by gratitude for the new chapter they have started as a family—one that completely differs from what Ruiz experienced two years prior when he devoted most of his time to working and earning his degree.

As a father of four children, Human Resources and Product Manager at GameStop and full-time student working toward a business degree at DeVry University, Ruiz did not spend many hours walking or star gazing in 2018. Life at that time consisted of a delicate dance between work and school for 15-hour days at GameStop’s corporate headquarters in Grapevine, Texas. He would start the day at 7:45 a.m. and stayed at his desk to complete class assignments long after his colleagues clocked out.

“I stayed until 1 or 2 in the morning sometimes,” Ruiz said. “I did schoolwork Monday, Tuesday, Wednesday—sometimes Thursdays—then Friday and Sunday I dedicated to my family. But in order to do this, I had to stay very organized and disciplined.”

This meant sacrificing leisure activities—such as lounging around the house or playing video games—to follow a well-planned, regimented schedule that focused only on what Ruiz deemed most essential for success at that time: school, work and family. He attended classes online, which allowed him to create a flexible schedule that fit his busy work-life needs.

“I’m not going to lie—it was hard,” he said. “Sometimes I just wanted to give up. But looking at the outcome, it was worth it.”

Keeping a Promise to Graduate

Ruiz knew his hard work paid off the moment he graduated in November 2019. Beyond accomplishing a goal to earn his business degree specializing in human resources without taking a semester off, he also fulfilled an important commitment to his family. Ruiz promised his mother, who passed before he graduated, that he would earn a college degree.

Ruiz’s mother worked in landscaping to provide for their family. Although she never pursued a degree herself, she paved a path to education for her son.

“I lived in a very low-income neighborhood and grew up in a house that was about 600-700 square feet,” he said.

Despite life circumstances, his mother still encouraged him to make good decisions. To steer him on the right path, she tried something special: “She knew I loved to read, so she brought me a bunch of comic books,” said Ruiz, who still reads comics and recently decked his home office in his favorite collectibles and a giant Godzilla poster. “So instead of getting into trouble, I became a comic book nerd.”

This early exposure to reading and his mother’s value for education still motivates Ruiz today: “Earning a degree isn’t just a testament to her memory,” he said. “But it shows that I am living with the values that she instilled in me and now I’m passing those on to my children.”

After earning his business degree from DeVry, Lowe’s Companies, Inc., a retail chain specializing in home improvement, contacted Ruiz with a job offer for a workforce consultant position at their corporate office—a role focusing on a mixture of store operations, human resources and configuring IT systems.

“Because I’ve had experience in change management, understand what the end users like and because I earned my degree, I have learned so much more about business,” Ruiz said. “Completing my education at DeVry was the last piece. I already had the work experience they needed and my degree was just the ‘bow on top’ that made me the all-encompassing package.”

While Ruiz had thrived for 13 years at GameStop, he was ready for a change and accepted the position with Lowe’s.

By March 2020, in the midst of a global pandemic, Ruiz started his position at the corporate headquarters for Lowe’s based in Mooresville, North Carolina. In very little time, he sold his house, purchased a new home and moved his entire family—consisting of children ages 6, 13, 14 and 17— across the country. While adjusting to change during a pandemic poses its own unique challenges, Ruiz plans to enjoy every moment of the process because he understands how much he has truly grown.

“I remember struggling with some bills about five years ago—before school and all of these opportunities—and now that’s not the reality I live in. My life has improved,” Ruiz said. “Earning a degree at DeVry definitely helped enable a lot of this change.”

Ready to see how earning a degree can help improve your future? Contact us to learn more about our undergraduate and graduate programs. 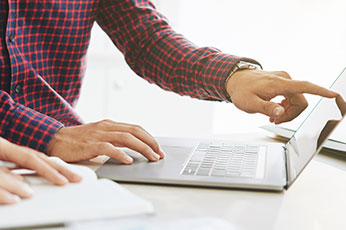 Balancing work and school: How DeVry student Marco Ruiz does it