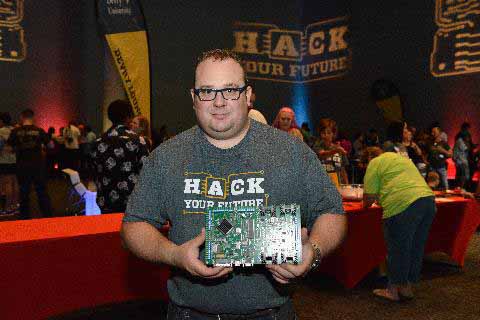 For Tim Bartsch, his children's habit of leaning back in their chairs at home finally reached the tipping point.

The Grove City resident has four children -- two teenagers and two ages 5 and 3.

"Two of my kids like to tip their chairs back," the Grove City resident said. "They are wooden chairs and I kept having to go to the hardware store" to buy materials to repair the wear and tear the tipping causes.

Even more of a concern was the potential for his children hurting themselves if they tipped the chairs too far back and fell.

"A lot of people -- kids and adults -- get hurt and even die due to accidents that happen when they're tipping their chairs back," Bartsch said.

His frequent requests for his children stop their tipping and keep their chairs on the floor didn't seem to register.

"My wife and I joked about how wonderful it would be if there was a device that could help train them to stop leaning back in their chairs," he said.

As he thought about a possible project for his graduate business marketing class at DeVry University, Bartsch said he began to take the idea seriously.

It led him to design what he calls Pavlov's Chair, a device that emits an audible tone to alert people when their chair tips.

"There are devices that prevent your chair from tipping back, but what if someone sits in another chair that isn't doesn't have a device like that," Bartsch said.

His idea was to come up with a device that would work toward changing one's behavior by keeping them from tipping the chair back in the first place.

"That's why we came up with the name, 'Pavlov's Chair,' " named after Russian scientist Ivan Pavlov, who conducted conditioned response experiments with dogs in the 19th century.

The sound Pavlov's Chair emits "is a really annoying sound" that gets one's attention, Bartsch said. The device attaches to the bottom of a chair seat, he said.

"The version I came up with is really a prototype," Bartsch said. "It's very rudimentary."

But it works, he said.

When he tried it out at home, "at first no one knew where the sound was coming from," Bartsch said.

Gradually, though, he noticed his children were tipping their chairs less often.

"I found that I was leaning back in my chair more than I realized" and it helped remind him to stop the habit, Bartsch said.

Bartsch, an account manager at the international electrical/electronic manufacturing company ABB, said he was interested in trying to put his device on the market. But after meeting with a patent attorney, he found that Pavlov's Chair may have too much in common with other products already on the market, even though those products are not the same as his device.

"It might be too cost-prohibitive for me to go through the process that would be involved" in trying to establish his own patent, Batsch said.
He said he is still interested in trying to market his device, but "right now everything's up in the air."