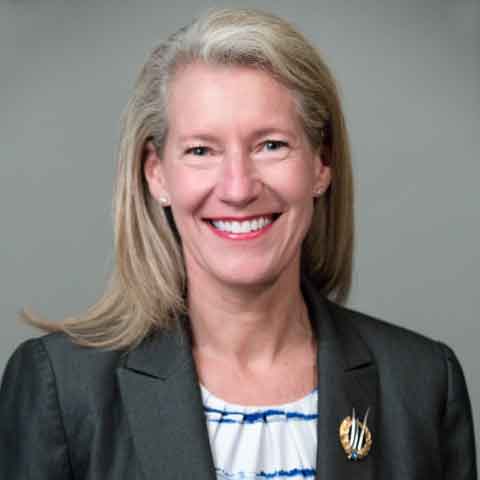 
Dana H. Born, Ph.D., is the faculty chair, Senior Executive Fellows (SEF) Program, faculty advisor for the Black Family Graduate Fellowship, and lecturer in public policy at the Harvard Kennedy School (HKS) of Government. She previously served as the co-director for the HKS’s Center for Public Leadership and faculty advisor for the National Security Fellows.

A retired Brigadier General with thirty years of service in the United States Air Force (USAF), Dr. Born served as a military commander in times of peace, conflict and crises.  Prior to Harvard, she served nine years at the United States Air Force Academy (USAFA) as the dean of the faculty, leading a 750 member faculty and staff with a $350M annual budget.  Previously, Dr. Born served as the commander of the 11th Mission Support Squadron, Bolling Air Force Base, Washington, D.C.  In that role she served as an on-scene Commander during the 9/11 attack on the Pentagon. Other assignments included: Aide, Speechwriter and Policy Analyst to two secretaries of the Air Force; exchange officer with the Royal Australian Air Force and in Afghanistan in support of Operation Enduring Freedom.

Currently, Dr. Born is an independent director on the Midwest Reliability Organization’s Board serving on the Finance and Audit and the Governance and Personnel Committees; a Trustee on the United States Air Force Academy's Falcon Foundation serving on the Strategy and Governance committee, and formerly on the Scholarship Committee; a supporting director on the Air Force Academy Foundation Board; and past president and board chairman of the International Women’s Forum, Massachusetts Women's Forum.

Dr. Born also serves as a distinguished fellow for the HOW Institute for Society; a consultant for the Core Leadership Institute; peer evaluator for the Higher Learning Commission. She is past-president of the American Psychological Association (APA Fellow, Society for Military Psychology) and fellow for the Society for Industrial Organizational Psychology (SIOP).  Previously, Dr. Born served as an independent director on the board of the Apollo Education Group, having served on the Compensation, Audit and Special Litigation Committees.