Studying, Working and Being a Mom: Blanca Leon-Carter's Journey

Blanca Leon-Carter understands what it means to have a dream—but more importantly, she understands the hard work and determination required to make those dreams reality. That’s how the DeVry University and Keller Graduate School of Management alum defeated the odds to earn her bachelor’s and master’s degrees while raising a child on her own and working full-time.

While studying, working and being a mom wasn’t always an easy feat, today she is one of Slalom’s Salesforce consultants. It’s a role that Leon-Carter rarely sees occupied by women in technology—yet alone a woman of Latina descent . “I am a bit of unicorn” she says.

Here’s how she “broke the mold” by being one of the first in her family to attend college and set off on an uncharted path to success.

Discovering Tech as a Teen

Unlike youth today, Leon-Carter did not grow up in a world filled with social media and IoT devices. As a teen, she experienced the opposite: her family did not own a computer and few people around her discussed technology.

It wasn’t until she and her mother started visiting a group of family friends that her perspective changed. “My mom had some girlfriends whose husbands had jobs in IT,” Leon-Carters says. “I would see them working in a room with different computers all around, so I’d just pop my head in and act nosey because I was a young kid who was bored around adults.”

This boredom piqued her curiosity, which marked the beginning of something special in Leon-Carter’s life and career. Each time she and her mother visited their tech-savvy friends, Leon-Carter asked more questions about the technology she spotted in their home. “Luckily, they never pushed me away and just answered my questions,” she says. “One of them actually gave us a computer he wasn’t using anymore and that’s how we got our first computer in our home. That’s how a lot of this started for me.”

Excited and curious, Leon-Carter began designing invitations, trying new programs and exploring creative ways to use these mysterious machines that completely fascinated her. She became so passionate about technology that a high school teacher recommended she attend DeVry Advantage Academy—an academic enrichment program that allows young learners to earn credits toward an associate degree while attending high school.

“At the time, there was this void in learning,” she says. “We had computers in school but if you weren’t using them outside of computer class, it wasn’t enough to really learn the technology, so Advantage Academy was perfect for me.”

During her time at the academy, she began studying programming languages like Cobol with instructors at DeVry’s Chicago campus. She thrived in the program as she discovered instructors who shared her passion for technology and could offer valuable expertise she hadn’t easily found elsewhere.

“Having a computer at home was one thing—but I didn’t really have anyone at home to answer my questions about it,” Leon-Carter says. “I was the only one who really used it, so when I got into DeVry’s Advantage Academy, it just opened me up to this whole new world. It took my passion to a whole different level.”

Studying, Working and Being a Mom

By the time she graduated high school, she knew she wanted to earn a bachelor’s degree but first had to adjust to new responsibilities; by 19, she gave birth to her first child, a son, and found herself quickly adapting to the realities of being a teen mother.

“I was in my senior year of high school when I had him and, with some support from my family, I pretty much raised him on my own,” Leon-Carter says. “That was really a struggle, but DeVry offering flexible schedules when I was ready to enroll in college after high school was key for me. This was so important because there is no way to balance studying, working and being a mom without flexibility.”

Raised by a single mother herself, Leon-Carter felt determined to succeed. She enrolled in DeVry’s Bachelor’s in Computer Information Systems program to pursue a career in tech with a plan to work her hardest to honor her dreams and family.

“I was one out of few people in my family who was actually even going to college, so we all felt a lot of excitement for me to start,” she says. “But I’ll be honest, being a teen mom can be terrifying. You’re young and trying to navigate transitions. I didn’t know what to expect.”

The DeVry Difference: All Support, No Judgment

When she started her undergraduate courses, Leon-Carter still felt anxious about going back to school while raising a family on her own. Thankfully, the support that was offered at DeVry put her more at ease.

To set practical goals, she met with DeVry’s student support advisors and carefully planned her class schedule based on how much free time she had each academic session. This was an essential strategy for completing her bachelor’s degree, especially as she raised her son and worked full time at a non-profit organization.

“The student support advisors are key because, yes, the goal is to graduate as soon as possible but not everyone can take 4 or 5 classes each session,” Leon-Carter says. “That just doesn’t work for everybody, so it was important for me to have allies in my professors and advisors. They helped me navigate what made the most sense for me.”

As she continued her studies, she stayed in touch with professors—including some from the Advantage Academy—and advisors for motivation. She would ask questions, seek advice and discuss flexible course options as needed. Other times, she felt motivated simply knowing she was fully accepted within the DeVry community.

“Being as young as I was and having a child on my own, it took a long time to finish my undergrad program, but what I appreciate is that nobody ever looked down on me because maybe I could only take one course at a time,” Leon-Carter says.

Graduating with a Bachelor’s Degree

Throughout her education, her advisors remained friendly and listened to her concerns without judgment. That's exactly what gave her that “extra boost of confidence” to think: “Don’t give up, because it can happen. It may take you longer, but it can happen. You will get there.”

With enough patience and determination, Leon-Carter graduated in 2009. “To be honest, I cried—before and after,” she says of her graduation ceremony. “Because it was kind of a bittersweet moment. For me, being a single mom and having to work full time and go to school was really tough. I had to be resilient. I realized, holy moly—I did that. Despite all the odds, I made it and not only did I make it, I’m one of the first in my family to make it and I hopefully can help inspire others in my family and community to do the same.”

Building on Her Career in Tech with a Master’s Degree

By the time Leon-Carter earned her bachelor’s degree, she had gained years of professional experience at the non-profit where she worked during her undergraduate studies. The hands-on training she received in DeVry classes and labs helped prepare Leon-Carter for dynamic problem-solving throughout her tenure with the organization.

In the 19 years Leon-Carter worked for the non-profit, she “wore many hats” and she wore them well: “The best way to learn is through experience and the non-profit gave me that space,” she says. “I started working there as a Program Associate and over time I took on more duties. I eventually was the Network Administrator, then I managed our databases and would later manage marketing and anything tech. Eventually, I managed all of IT, so by the time I left after 19 years I was the Director of Operations and IT.”

Several years after earning her bachelor’s degree, she began reflecting on her professional goals and decided to enroll in DeVry’s Master’s in Business Administration (MBA) Program. As someone who welcomes new challenges, she planned to push herself, deepen her business knowledge and leverage a master’s degree for future career growth at the non-profit and beyond.

“I deliberately stayed with DeVry because some of my credits would transfer from my bachelor’s degree, so getting my master’s degree was less expensive and I already knew the structure of the school, the quality of the courses and how the hands-on training works at DeVry,” Leon-Carter says. “It was an easy transition.”

Similar to her undergraduate studies, Leon-Carter used flexible online learning to balance her job and classes during the day and connect with family in the evenings. This time, she felt much more prepared to balance going back to school while raising a family. She buckled down on her studies and earned her MBA within two years.

Coding and Growing with Salesforce

After graduating from DeVry’s MBA program in 2015, something unexpected happened: the non-profit organization Leon-Carter had worked at for years experienced a change in leadership that did not reflect what she desired for her own personal fulfillment or career. “Luckily, I had my MBA,” she says.

When she decided to leave her job, Leon-Carter wasn’t sure what her next role would be. She knew she wanted to develop new skills while seeking opportunities, so she started taking a 10-week course with Rad Women, an organization dedicated to increasing the number of women in technical roles. The Rad Women course introduced Leon-Carter to a new world of career possibilities within the Salesforce coding platform and inspired her to explore Salesforce consulting.

Similar to when she first discovered tech as a teen, she followed her curiosity for new technologies, which helped Leon-Carter master Salesforce. In 18 months, she earned three certifications in Salesforce, developed specialized skills in the platform and began sharing her expertise with learners online.

It’s this dedication to Salesforce—combined with Leon-Carter’s education, technical skills and experience—that ultimately made her a competitive candidate for the Salesforce Consultant role she has at Slalom today. Leon-Carter started the role in March 2020 and continues to host events to help empower women in technology to follow their dreams.

“Sometimes you just have to take a leap of faith,” Leon-Carter says. “Because no matter where you’ve been, if you put your heart into it and you’re ready to do the work that it takes to achieve your goals, you can get there.”

Contact us to explore our tech programs and learn how online education works. 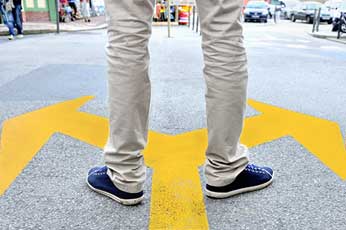 MBA vs Master's in a Specialized Field: What's the Difference?